We had another successful dance last night - and a very good time with Steve Holland and Brooklyn Swing Ensemble. Attendance was about 60. Evelyn can report the actual numbers. There were 23 newcomers, Some ballroom dancers came from the group now meeting at Round Hill Community House on 2nd Saturdays. A group of 8 or 10 younger folks from the Greenwich area also attended.

Additionally, the Barn Dance in Westport that Oliver organized on Friday night had similar attendance, including a few familiar Round Hill faces. The people really enjoyed Bill Fischer and the Fiddleheads.

At the height of the dance, we had three boisterous lines rollicking up and down the floor to the syncopated stylings of Marco Brehm, Danny Elias, Sam Zygmuntowitz and Norm Plankey. By popular request, the band also played two swing dances in addition to the traditional waltzes.

Oliver inaugurated an after-dance gathering at MacKenzie's Bar and Grill a little way south on High Ridge Rd. We had a dozen dancers in attendance which was a pleasant way to wind down the evening.

Thanks to everyone for pitching in last night! We look forward to seeing all of you again at our April 22nd contra featuring Chart Guthrie and The Fascinating Swivets.

Check back soon
Once posts are published, you’ll see them here. 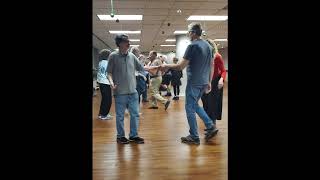 Bob Isaacs and the Flying Romanos

Liz and Hannah with The Fiddleheads

George and Jen with the Gotham Gals

Sue Gola with the Round Hill Community Band!

Billy Fischer with The Round Hill Community Band